I have an inquiring mind, a proclivity for inquiring and I am inquisitive by trade. Discovering new stories, getting to know new characters, stimulates my imagination. Therefore, there is nothing better for me than surfing the net, going from a video to an article, a gossip, serious, semi-serious, or serial news. I always try to read between the lines and search for something interesting to learn and convey. Sometimes it happens that in my roaming I find pleasant things. And so it was when I discovered Ambra Mattioli. I happened to watch her in one of her videos while looking for David Bowie’s music tracks. Bowie’s birthday is on 8th January, and he died on 10th January, two years ago at the age of 69. I noticed Ambra Mattioli’s videos on YouTube, and I must admit I did not realize it was a woman singing. Incredible!, I thought. So, I went on reading a few articles on the web about her and her band, the Aladdin Insane, and I checked her website. Hence my interest in her. I tried to contact Ambra and she immediately answered. She was kind of surprised but available. And I understood that she is just like that. She is spontaneous and simple. 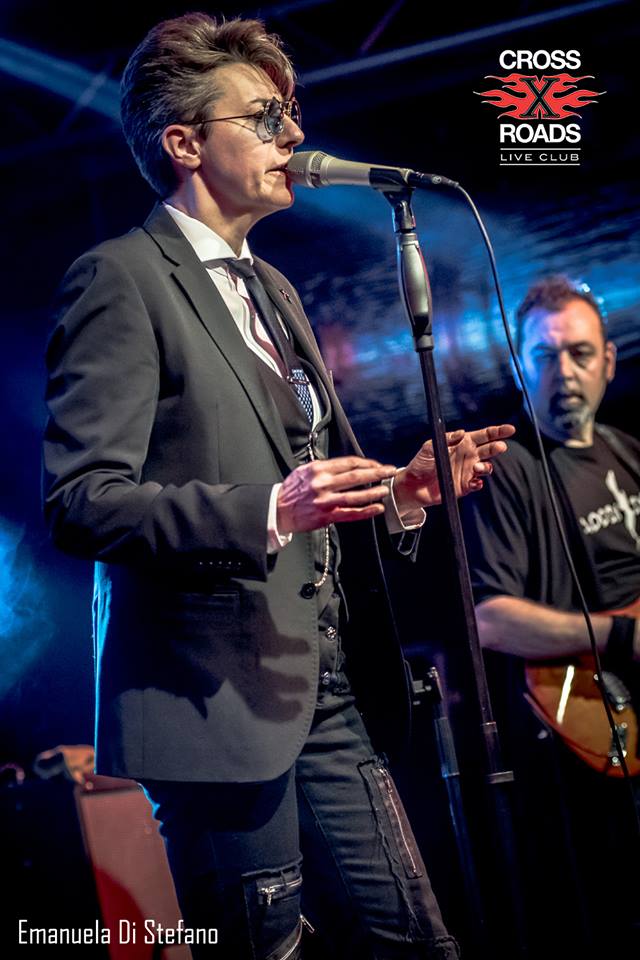 Then I discovered an uncommon person – although she does not like to be defined that way. She is a musician, singer, painter, writer, and also project-designer, cabinet maker of fine mahogany furniture and furnishing solutions. In short, an artist, or “art performer” as they say now, with many facets, passions and abilities.

I know that there are people who think that doing too many things ends up by making a dispersive enterprise, lacking definite features, especially in the artistic field, where it is so difficult to get one’s own recognized niche. But I do not think so. If there are – and there are – people capable of expressing what is in their mind in many different ways, they are welcome.

When Ambra was a teen, she went to London with her guitar. She washed dishes at Wimpy’s and supplemented her income by singing Bowie’s songs on London’s tube. It was for her a year of new thoughts and discoveries. Then she went back to Italy and she set up a band – the “Clips” – with some friends, which today are now all established musicians. The band played its own original music, progressive rock, on Ambra Mattioli’s lyrics and opened the concerts of Nico of the Velvet Underground on her tour in Italy. But Ambra was also working at RCA record company with Petrossi, Migliacci, Fea and Basile. And on top of that, Ambra wrote stories, a science fiction novel that she herself brought to the Mondadori publishing house in an adventurous way.

Life went on, she got married and had two sons. They are twins. She started to paint, unusual, thoughtful, and poignant paintings, somewhat funny. In any case, very unique. Her paintings were exhibited not only in Italy but also abroad and they were published in top-rated catalogues. Then, she cultivated her passion for design, for fine wood-working and largely used mahogany in letting loose this drive of hers, producing furniture and furnishings of value, craftworks with a distinctive design.

Nonetheless, the great love Ambra Mattioli had for music – and for that of David Bowie in particular – was never dormant. She founded another band, a tribute to David Bowie, a tribute to his art, the Lady Stardust & Diamond Dogs. When this experience ended, it lead to the foundation of another band, the Aladdin Insane.

I know very well that there are people who, in principle, say they hate those who make tributes, make covers of other performers’ music. People who maintain that this is not art because it is not original music, that these artists have no ideas, do not have real talent and, and being the reflection of other artists, they are advantaged by the reputation of the famous performers of reference. To all of them I want to tell a great truth: for centuries, other people’s music has been covered, sung and played. Just think of all the philharmonic orchestras in the world, all the opera singers and the more or less famous singers who sing other artists’ songs. I do not accept the axiom that in that case it is different. It is not! I think that the only discriminating element is whether you make good music or not, if you can really play and sing or not, if you know how to interpret without being a pseudo clone, if you know how to fascinate the audience, if you can make people dream. It is true that in this field, especially in modern music, there are some incompetent, smoke-sellers who are struggling just to earn a crust. But when there is passion combined with interpretation, ability, commitment, discipline and sacrifice, when performers are able to transmit emotions, behold! it is art, regardless of what is sung or played, and no debate on that point.

And this is Ambra Mattioli, who continues to write and to publish her novels and short stories (they are on all on-line platforms), and goes on with her music research. In 2015, Ambra is the only one in the world who, for the twentieth anniversary of the release of Bowie’s album 1.Outside – which she considers an under-estimated masterpiece – performed the entire album at Rome’s Cross Roads Live Club. She even performed the spoken and recited parts, accompanied by professional musicians. 1.Outside is really complex music, but still cool and modern today, a difficult challenge that she described as exciting.

Bowie’s death deeply saddened her, like the death of a beloved one. Perhaps it is exactly because of her love for David Bowie, that she was driven to do even more. A part from the great shows followed by large crowds of fans (very beautiful performances at the Piper Club and at the Gay Village in Rome), Ambra Mattioli participated with her interviews in a short film entitled “Burning Tape” – which she herself produced and interpreted –  and in the Bowie Next project, a film that will be finally released in the coming months.

Ambra Mattioli is well known for her outstanding interpretation of David Bowie. Dave Thompson, writer and journalist, mentioned her several times in his book “The Freakiest Show: David Bowie cover versions” and in the last edition of his book, Thompson even included a few pages about Ambra Mattioli with photos of her.

Her talent in interpreting Bowie was also noticed by movie director Andrea Pallaoro, who wanted her in his film “Hannah”, presented at the 74th Venice Film Festival. Actress Charlotte Rampling, playing the leading role in the movie, was awarded the Volpi Cup for best female performer. In the film “Hannah”, Ambra Mattioli plays a famous Bowie’s song, a chance to make the Thin White Duke, living inside her, known to the world.

Ambra went on with her research. So far, Ambra Mattioli and the Aladdin Insane are the only band in the world that played – entirely live and in the original keys – the whole album Blackstar, the last David Bowie’s masterpiece. Blackstar – which Ambra Mattioli and the Aladdin Insane performed at the Cross Roads Live Club in Rome – is an album designed and conceived only for studio recording. It demands uncommon interpretative techniques. It was a live effort that required exceptional commitment and passion, a real new challenge for the band and an act of love.

And even in this case, they showed that theirs is not a simple tribute to David Bowie, but a real show, which offers a dream to the audience, to Bowie’s fans, to the lovers of good music.

Finally, here is what Ambra Mattioli always says with genuine emotion: “The applauses we receive are above all for him, for his music and only a small part is for us performers. We are just reproducing his music, as reflections in the facets of a diamond”.

Here are some links: