Aladdin Insane is not a tribute to David Bowie only, but also a real celebration in his honor.
That is how we want to define this tribute band dedicated to the great “Thin White Duke”. Through their performances, you will find yourself going through Bowie’s entire career. Moreover, what makes them even more special is the band’s solo voice, Ambra Mattioli. 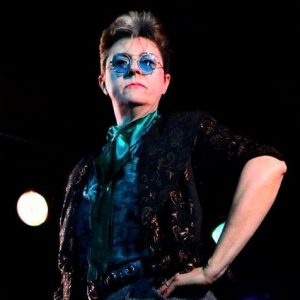 The style and similarity to Bowie makes this Italian woman unique! So what about her musical career? Ambra has contributed to several groups, starting from “Cronosfera” in 1976 to “Clips” in 1986, participating in the Italian tour of Nico Velvet Underground with the role of support group.

Her real Bowie adventure began in 2007 with the “Lady Stardust & Diamond Dogs“, a tribute band to David Bowie. Her strong passion for the White Duke grew more and more until she reached the current tribute band of Aladdin Insane.

Ambra is similar to David Bowie from a behaviour perspective, including the multifaceted expressive forms. The art of this woman is not only, the music: Ambra Mattioli is also a painter! She attended to the “Scuola Libera del Nudo” at the Academy of Fine Arts in Rome and created many paintings, always appreciated during her personal exhibitions.

Ambra is also a writer! She published several books, as “Paradigma Imperfetto, Storie di universi periferici” (The Flawed Paradigms, Stories of bordering universes), a collection of nine short stories. They are possible and impossible tales, where she leads the reader, and the characters across the threshold of bordering universes, which are similar, and yet never identical to our own. Places of the mind, soul and body, which the instinct rather than the intellect can recognize.

She also wrote a trilogy: “La trilogia di Ambra”, which takes place in about 50 years of history.  The books are “The Arcade,” a horror science fiction book, “Il Collezionista di Opportunità” and “Fatti per non durare”, a pure science fiction-related theme to the whole humanity. The trilogy, published as “Amber’s World”, consists in English in two books: “The missing piece of the puzzle” and “The other face of God”.

Ambra Mattioli is a woman with several interests and she is determined in all the work she does, even though music takes the first place in her heart. Dave Thompson, author and journalist, quoted Ambra several times and dedicated her, page with photo in his book “The Freakiest Show: The Armchair Guide to David Bowie Versions 1964-2017”.

Director Andrea Pallaoro noticed her talent in interpreting David Bowie and chose her for a scene of his “Hannah” movie. The film is in competition at 74th Venice International Film Festival and for Ambra it was a unique and exciting experience.

If you want to know more, or to stay updated on Aladdin Insane’s shows, you can visit their official website: www.aladdininsane.com , their Facebook page or the YouTube Channel .

To find out more about Ambra Mattioli or even to know her future projects, just visit her official website! www.ambramattioli.com , her own Facebook page  or the YouTube channel .