Where will it end.

When music is inspired by strong emotions and influenced by the very soul’s reaction to tragedy, sorrow and grieve , it turns into a powerful message in the form of a song with the unique sound and the strength to carry meaningful substance with it, such as “Where will it end”.

The Tragedy behind the music.

To bring this song to life, the pain for the shocking events of the Garissa University College attack of April 2, 2015, in Kenyan soil, that killed 148 people and left 79 injured.

The Garissa University Massacre came down in history as the deadliest in Kenya since the 1998 US Embassy Bombing and as the second deadliest overall and was perpetrated by several gunmen belonging to the Al-Shabaab group that later claimed full responsibility for the attack. In fact on April 4th a message from this group was sent to the Kenyan population where they denounced the unspeakable atrocities committed against the Muslims of East Africa and claiming the attack as a revenge for those killed by the Kenyan security forces. They also claimed the site was chosen as one of those institutions built over a land belonging to Muslims and colonized by Non-Muslim by force. 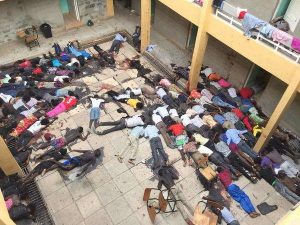 Where Will It End

The Singers and the Composer.

The very structure of the song is a mix of many different souls that worked together as one to promote the message of unity that many times is overlooked by the world’s powerful entities in this controversial time of human history.

To sing this hymn to the victims and the grief of their families, two African native reggae artists: South African Thuthukani Cele, former keyboard player for Lucky Dube and Congolese artist, Mermans Mosengo, member of the international group Playing for Change.

Their style and unique vocals bring the listener into this journey of words and melodies, accompanied  by the Zulu harmonies of the The Wits Choir of Johannesburg who most of all, is specialized in African Ethnic sounds.

This song has been striking the heart of many, so much it has been made into a second version in 2016: “Where will it end” is in fact also sang by the New York singer, Brian Clayton, great soul vocalists who worked alongside great names in the music industry like Bruce Springsteen, Elton John, Sting  and Aretha Franklin.

His vocals are accompanied by the Soweto Gospel Choir, the first African native Gospel band, formed by more than 30 members and famous worldwide, taking parts in many international tours and giving their voices for projects like Pixar’s Wall-E, featuring in the Golden Globe nominated song “Down to Earth” with Peter Gabriel and Thomas Newman.

The creator of this song is an Italian song writer and producer Mariano Schiavolini who made sure from the start of his career that his songs mattered.

His style unites different sounds and harmonies, representing his songs in a pleasant mix of soul, spiritual and progressive rock making it easy and intriguing for many different singers to lend their voices to a noble cause.

The Message in Music.

His passion for Africa made the humanitarian message as the most relevant in his songs and outside the music as well making him part of the project “Musica For Africa” who sees him gather artist from all backgrounds and scenes to play as one in an iconic ensemble, grasping with all their passion to the message of unity the world keeps forgetting.

The author speaks of his “Where will it end” as an hymn to those students killed mercilessly that day in Kenya, not indiscriminately, but because of what they believed in, martyrs of freedom itself.

The lyrics, written in English by Nikki Turner a writer from Cambridge, illustrate the struggle between the two worlds of light and darkness, making the choice that would destroy so many lives for the simple hatred born by ignorance.

“When you are the danger in every shadow, then only you can make it right.” these words in the lyrics are an appeal to the very forces who seek to destroy, the forces that pushed the man who killed so many innocents to pull the trigger.

“Tell me how can you hate me, when you don’t know me? And who said you should hurt me, before we’ve met? And tell me, who was it that told you, that I could never be your friend?”

The chorus questions are a plea to reason, questions that we could ask to anyone from any sort of background, down from the streets to our neighbours up to the most important world leaders.

Fear and ignorance are the canalizing entities that push hatred forward into feeble minds that commit atrocities in the name of extremism.

In the video directed by Loraa White, we can see the parallel experience of two protagonists starting their day.

One is a student getting ready for school, the other is the assassin getting ready to shoot: the story is narrated showing segments of their lives and how they differently cope with that is going to happen and will inevitably happen at the end.

The student’s everyday life is torn apart by the bullet of the murderer, all her hopes for the future she was planning thanks to her choice of pursuing education gone in an instant all because she and her fellow students, in the eyes of a twisted mind, chose to believe in the wrong religion.

The message is clear, message from those who died that day to those who will keep fighting: do not give in to fear or ignorance, keep believing, keep studying, keep questioning who tells you the world is to be one way only and that there is only one right.

A date to remember.

The second anniversary of the tragedy of the Garissa University College, is approaching the 2nd of April 2017 and to never forget this horrible chapter still ongoing of human history, the song has been released in online stores and available since the 31st of March 2017.