It is recently reported that in Cairo, Egypt, where was the ancient Heliopolis, were found the remains of a huge statue of the great pharaoh Ramses II. Covered with mud, were rekindled pieces of the statue long 8 m, the discovery was made by Egyptian and German archologists who were working right in this zone, in the Matariya area, where in ancient times stood the sacred city dedicated to the Sun God, Ramses II, precisely. This discovery represents an amazing breakthrough for our times, it now happens more and more often that archaeologists are  able to find artifacts so old and so main interesting.
For the uninitiated, Ramses II was the third pharaoh of the nineteenth dynasty and reigned for over 66 years, from 1279 to 1213 B.C. from the Egypt to the Syria until the Sudan; once their studies are over, the remains of this huge statue will surely go to the Grand Egyptian Museum, which will open in 2018 Giza. 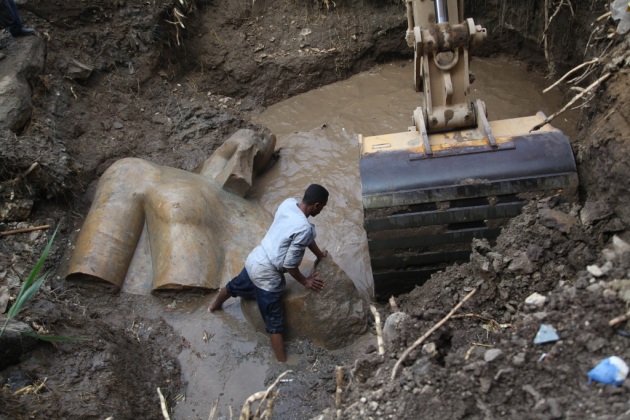 For who did not know, the seven wonders of the ancient world were seven monuments that in the anciet age, thanks to their beauty and size, were awarded this title. Here they are all the seven!
1. The pyramid of Cheops in Giza (Egypt) – is the only one  remaining intact
2. The temple of Artemis at Ephesus (Turkey) – now there are only a few ruins, but this beautiful temple dedicated to the goddess Artemis, was able to return to this list due to its massive size
3. The Colossus of Rhodes (Greece) – now, of this huge statue, over 35 m high, there is no trace, but at the time was a real marvel
4. The Hanging Gardens of Babylon (Iraq) – fantastic terraces adorned with huge trees and colorful flowers
5. The tomb of Mausolus at Halicarnassus (Turkey) – The few remains are in the British Museum in London, it was a huge marble and gold palace
6. The Lighthouse of Alexandria (Egypt) – today there are only ruins underwater, but, at the time it is assumed that this lighthouse was really huge, nearly 150 m!
7. The Statue of Zeus at Olympia (Greece)  – this stunning statue was made of gold and ivory, and was 15 m high !